Move aside, Warren Miller!! (OK, just kidding.) These are from last weekend.

Out of the chute:

Posted by LeesMyth at Saturday, January 30, 2010 No comments:

Email ThisBlogThis!Share to TwitterShare to FacebookShare to Pinterest
Labels: Skiing

I finally found out the story behind the zoetrope-like subway mural seen from the Manhattan-bound Q or B trains, between De Kalb Avenue and the Manhattan Bridge.

According to the Masstransiscope blog, the animated mural was created by Bill Brand around 1980 and installed in the former Myrtle Avenue subway station. Apparently the mural in the abandoned station was also essentially abandoned at some point, but it was restored in 2008.

I took a video clip of the animation in December and caught most of it, I think. I'm RE-POSTING it here for convenience:

My first post on this was in October 2008, featuring a different clip. Masstransiscope remains by far my favorite work of subway art.
Posted by LeesMyth at Friday, January 29, 2010 1 comment:

Email ThisBlogThis!Share to TwitterShare to FacebookShare to Pinterest
Labels: Transit

This was my first ski weekend of the season, and it was relaxing and fun.
We played Zingo (bingo with zing) and Yahtzee in the off hours (it seems that Yahtzee has supplanted Mille Bournes as Lee's favorite game, for the nonce).
We took my nieces skiing for about an hour each day, to give them a taste of it and let them build up some skills and confidence. It took a while to get them ready.... 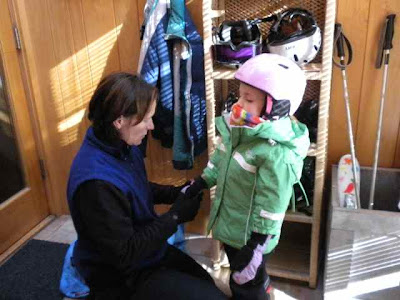 We're off, with an occasional "WOO-HOO!"

Occasional setbacks on the slope called for a bit of hands-on reassurance such as a "daddy ride": 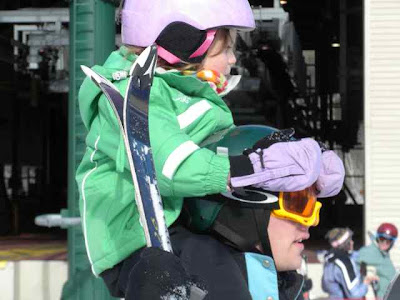 But the girls were both so brave! And they both made it on to chairs far too tall for them, with a little help from their grownups: 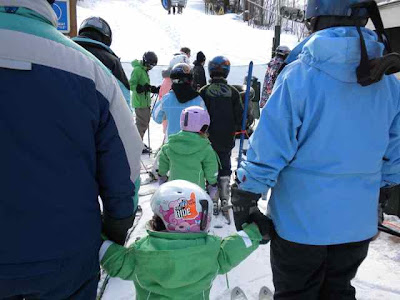 Clara wasn't quite ready for solo skiing (she can't do the snow plow yet), but tandem skiing suited her just fine:

Although we all hovered protectively, there were still some thrilling moments when Lee was skiing in and among other skiers and riders (she successfully avoided them, including those who had fallen and were stuck in her path): 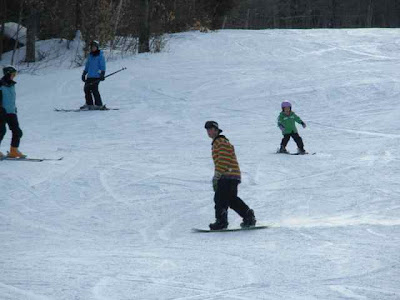 Lee showed excellent control of speed and direction, and good instincts to skirt the trouble spots.
We had spectacular weather and great conditions. A peak's view of peaks: 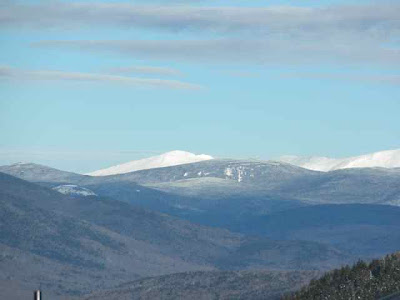 Email ThisBlogThis!Share to TwitterShare to FacebookShare to Pinterest
Labels: Skiing

Since I have the day off, I agreed to wait for the furnace repairmen - who were supposed to come before noon. So my day was shot until 3:30 pm. However, I did get to watch Kings for the first time (thanks, hulu!). Got all the way through episode 4. It makes me think of I, Claudius. (Mostly Queen Rose, I suppose, like Livia in her machinations.) The parallels with the biblical story are interesting, but almost a little distracting because there are so many details (characters, subplots, etc.) that don't map to the original. It's interesting in its own right, though. The first episode was a little too much of a war movie for me, but it gets better quickly....
Posted by LeesMyth at Monday, January 18, 2010 No comments:

This week promises to be a big one for facing my fears. Tomorrow I start my first-ever French conversation class. Chatting with strangers in French? Yup, only one element missing to make it a perfect storm.
Elsewhere, I know what I need to do - it's just the doing that seems so incredibly hard. There's no way to break deeply ingrained habits except by forming new ones. Supposedly six weeks are needed for new habits to set.
Tim Keller talks about the heart as an idol-manufacturing factory. If you tear down one idol, another will quickly take its place. He argues that only God - the gospel - can displace our idols. This seems at first to play right into the hands of those who argue that God is a social construct; what is the content of this "God" that we are supposed to enthrone in our hearts? But the gospel (in Keller's telling) is a specific way of understanding God that maybe (just maybe) gets away from the content dilemma: it's an understanding that we are far more hopelessly lost than we ever imagined, and more generously loved - at far greater cost - than we could ever dare hope. With respect to the dethroning of idols, however, there is no six-week victory; Keller says he believes the process "will take our entire lives."
Posted by LeesMyth at Monday, January 11, 2010 No comments:

This morning I saw an advertisement that began with the words: "Get the body you deserve".
But isn't that exactly the problem? The prospective purchasers of the product already have the body they deserve based on their long-term eating and exercise habits. What they are being sold (should they choose to figure out exactly what the product is and then purchase it) is the opportunity to get a body they don't deserve and haven't in any way earned.
That's not to say that everyone on earth has the body he/she deserves. There are those who have been unfairly ravaged by accident, illness or stroke, leaving them paralyzed, limbs amputated, and the like. But this product is not really being marketed to them, is it?
Posted by LeesMyth at Wednesday, January 06, 2010 No comments:

The first night of the new year at Lincoln Center: 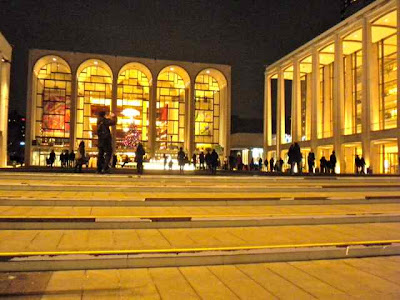 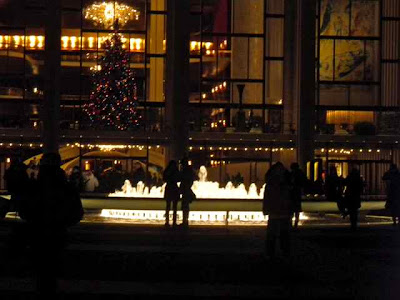 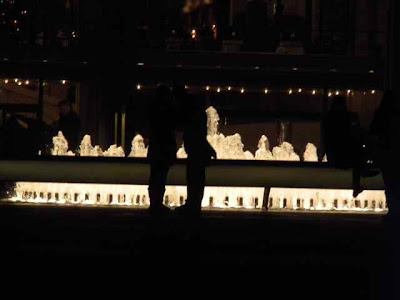 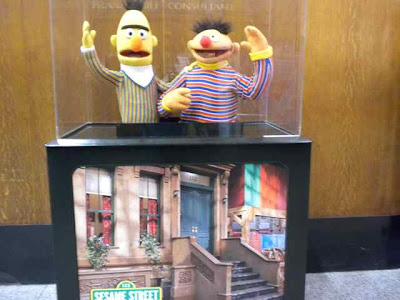 Posted by LeesMyth at Saturday, January 02, 2010 No comments:

For New Year's Eve, I dined out in K-town with my Redeemer home fellowship group plus some additional folks I'd not met before (mostly friends of Jean Soo or Ryan) who were quite nice. I ordered a dumpling soup, which was delicious.

Afterward, I welcomed in the new year with a 2-hour yoga party. It was so good! We started by saying farewell to things or people we wanted to let go of. You take a small piece of flash paper, write a word or name on it, hold it briefly to the flame of a candle, and throw it up into the air. All I can say is: Wow! A very powerful experience. (Though I might repeat this in a few months as the things I am letting go of were stubbornly rooted.) Then we went in to a seemingly regular vinyasa yoga class, but with some great music - even some dance tunes at just the right time - and with the teacher slowly lowering a paper ball at the front of the room over the course of the evening. Toward the end, we all took some regular (non-flash) paper and wrote things we'd like to have more of in 2010 as we let go of the things we don't want. Finally, as we entered corpse pose, we were lightly sprinkled with confetti! People enjoyed cake and champagne afterward. I felt so serene on the subway ride home.

Today, the annual dim sum expedition followed by mahjong. Hooray! Patricia won 4 times, I won twice, then Paul won once. In that order. We didn't quite finish the East Wind round, unfortunately, because we ran out of time. Next time, we'll play a more serious game!
A great start to the new year with friends all around.
Posted by LeesMyth at Friday, January 01, 2010 No comments: